Celebrating 150 Years of the Mahatma 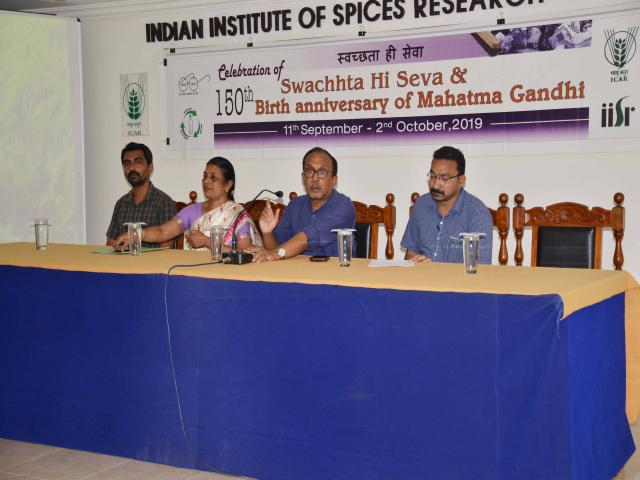 The Swachhta Hi Sewa 2019 and 150th birth anniversary of Mahatma Gandhi was observed at ICAR-IISR, Kozhikode during 11th September to 2nd October 2019. At ICAR-IISR head quarters, the cleanliness fortnight including awareness programme to reduce use of plastic and birth celebration of Mahatma Gandhi was inaugurated by Dr. Santhosh J. Eapen, Acting Director, ICAR-IISR, Kozhikode. Dr C.K. Thankamani , nodal officer briefed about programmes proposed to conduct during the fortnight. Cleanliness drive were organized at respective centres.

A variety of programmes including cleaning the institute premises, laboratories, collection and segregation of plastic wastes, creating awareness among the general public, farmers and students regarding the ill effects of plastics through rally and lectures were organized during the fortnight. Placards bearing the pledge conveying the message on harmful effects of plastic were exhibited and separate bins were kept for disposing plastic wastes. Literary competitions including essay writing and painting on “Challenges in Waste Management” in English and local language (Malayalam) were conducted for staff of the institute. To create awareness among the student community, various events including debate and quiz competitions were organized at the institute. Volunteers of the institute performed a cleaning programme near JDT Islam Educational Complex at Vellimadukunnu, Kozhikode. The fortnight programmes were concluded on 2nd October during which Shri. C. Subramanian, the Chief Guest delivered a lecture on “Ill effects of plastics” besides distributing prizes to the winners of various competitions. The routine housekeeping activities were meticulously followed at the institute and respective centres to maintain cleanliness in the workplace, laboratories campus and residential area in which all the staff members including SRFs, apprentices and contractual labourers actively participated.