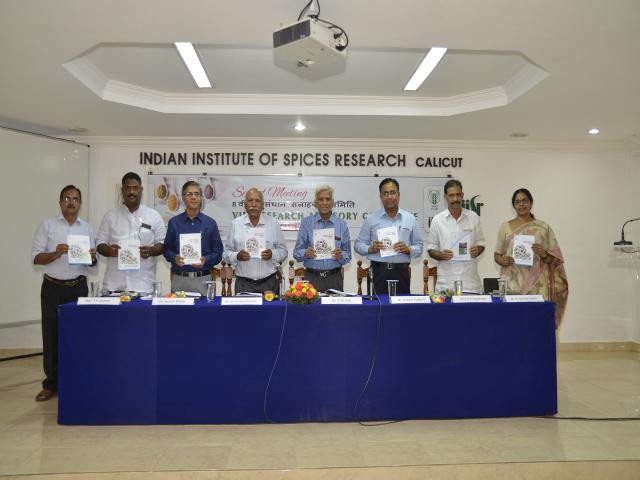 The second meeting of the VIII RAC was held on 12-13th April 2018 at ICAR-IISR, Kozhikode. The members of RAC, Dr. R.N. Pal (Former DDG (Hort.), ICAR, New Delhi and Member, RAC), Dr. V. S. Korikanthimath, Former Director, ICAR-CCARI, Goa; Dr. Srikant Kulkarni, Former Head-Plant Pathology, UAS, Dharwad, GKVK; Dr. Suresh Walia, Emeritus Scientist, Division of Agrochemicals, ICAR-Indian Agricultural Research Institute, New Delhi; Shri. T. P. Suresh and Shri. K. K. Rajeevan (IMC members) were welcomed by Director in his chamber at 9.30 am on 12th April 2018 and after a preliminary discussion matters of the institute, a lab and field visit was arranged, where the concerned scientists explained the RAC about the ongoing programme. The members were taken to the Post Harvest and Food Safety facility which was established at the head quarters during last year.

The Inaugural function was held in the Silver Jubilee Hall at 11:30am. Dr. K. Nirmal Babu, Director, ICAR-IISR welcomed the gathering. Dr. J. Rema, Secretary, RAC presented the Action Taken Report on the recommendations of the first meeting of the VIII RAC held from 19-20th May 2017 (Annexure II) and was approved by the RAC. The mobile app on turmeric, which was launched recently, was presented for the information of the RAC. The Research Highlights 2017-18 was released by Dr. R.N. Pal. This was followed by the technical sessions were ten megaprojects were presented and approved. The plenary session was held at 11.00 am on 13th April 2018. This was followed by presentation of major recommendations by Dr. J. Rema. The meeting came to a close by 1330 hrs with vote of thanks by the Member Secretary.