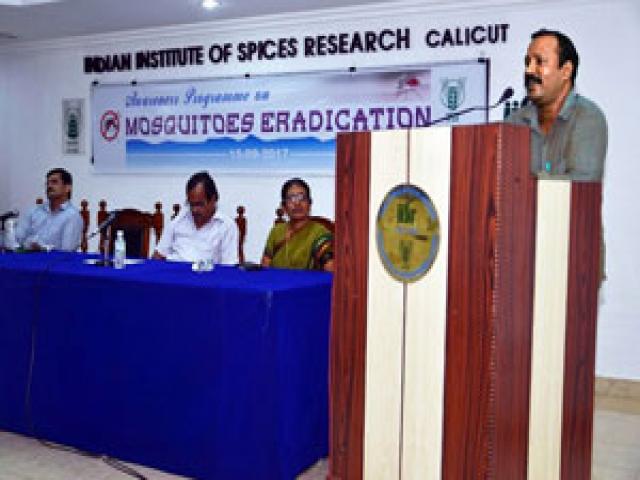 The Swachhta Hi seva – 2017 fortnight was observed at ICAR-IISR, Kozhikode during 15th September to 2nd October, 2017. At ICAR-IISR headquarters, the cleanliness fortnight celebration was inaugurated by Dr. K. Nirmal Babu, Director during which, the Swachhta pledge was administered to all the staff. On the occasion of Swachhta fortnight, an awareness programme on sanitation and mosquito eradication was organized. As a part of specific activities, Sewa Divas was observed on 17.09.2017, during which cleaning activities were undertaken in the Institute premises. Under Swachhta Hi Seva programme through Shramadaan, a toilet facility was established for the residents of Pannikkottur Harijan Colony, Kozhikode on 24th September 2017. The Sarwatra Swachhta (Cleaning of public place) was organized by cleaning 6/3, East Moozhikkal on 25.09.2017. Besides this, a cleaning campaign at Kozhikode beach on 1st October 2017 was carried out. The staff of ICAR-IISR KVK and experimental farm Peruvannamuzhi, organized a cleaning programme at Wild Life Rehabilitation Centre, Peruvannamuzhi, Kozhikode and garden near Peruvannamuzhi dam. In order to spread the message of clean and green environment, programmes including planting of nutmeg, cinnamon and avenue trees were organized. Awareness programmes for farmers as well as students and session on organic waste management was also organized during the occasion. The valedictory function of Swachhta Hi Seva - 2017 observed at ICAR-Indian Institute of Spices Research, Kozhikode was held on 2nd October, 2017. Sri. Dileepkumar , Health Inspector, Department of Health, Kozhikode Corporation was the chief guest and distributed cash price to winners of essay competitions. Dr. C. K. Thankamani, Principal Scientist and Nodal Officer of Swachhta programmes presented a brief report on the activities undertaken during the fortnight. Video clips on Swachhta activities were also prepared.